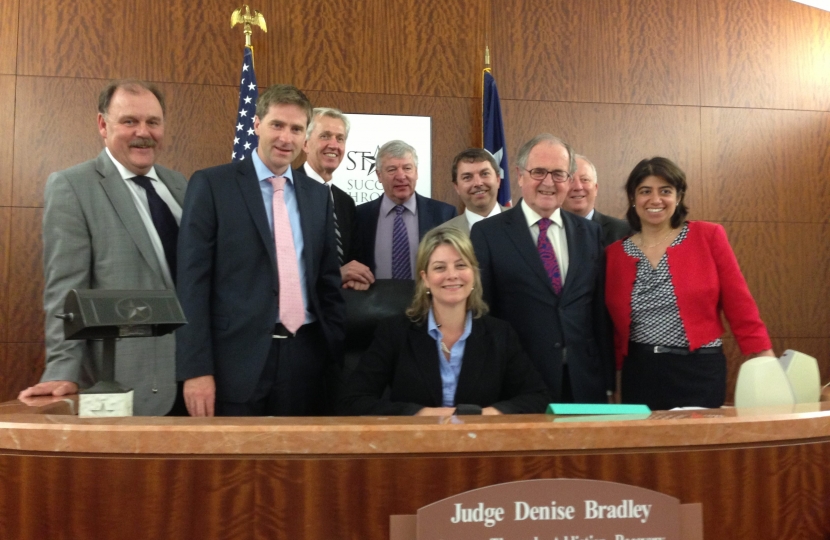 July 2013 saw the Commons Justice Committee, of which I am a member, visit the United States to learn about criminal justice policy - Texas style. We visited the Lone Star state as part of a major inquiry we're undertaking on crime reduction policies. Do read on however, because everything you know - and some of the prejudices you may have - are about to be challenged.

As in Britain, it has been a given in American politics that you win elections by talking tough on crime. The inevitable result has been a blitz of new laws which, taken together with the often illiterate 'war on drugs', mean that the prison population is growing much quicker than the general population. As we were told, a country with 5% of the global population accounts for 25% of prisoners worldwide – and is spending £43bn a year locking them up.

Texas seemed to be ahead of even that trend and just eight years ago, it had the highest incarceration rate in the world, with one in 20 adults in prison, on probation or parole.

Seven years ago however, the Texan state budget provided $2bn for a wave of new prisons to house thousands more inmates. Then Republican Jerry Madden (who we spent a fascinating afternoon with in the state capital Austin) was appointed chairman of the part of state government responsible for criminal justice and he took a conservative inspired leap of faith.

Jerry Madden is hardly what we would call a fluffy liberal. A strong supporter of George W Bush with close ties to the Tea Party movement, he happily describes himself as "a typical Texan Republican" and that's part of the reason why he was able to drive this revolution.

As he told us at the start of our meeting, "I'm not interested in the feel-good stuff, I'm interested in what works," and for that he immediately had my ear.

Madden worked closely with Tony Fabelo (a great character who we also met over a Texan cup of tea). Tony is a former adviser to both Democrats and Republicans governors and he provided the hard evidence to challenge the 'tough on crime' lobby orthodoxy.

Fabelo's figures showed a rising incarceration rate yet other states with a falling prison population rate rates saw greater falls in crime. And crucially for their cross-party plan, one in three Texan inmates was back behind bars within three years.

The focus would therefore be to give the judges (who are of course mainly elected in the US) options and to finally tackle the underlying cause of repeat offending such as drug/drink abuse and mental health problems. They then made what must have been a welcome call on Texas Governor Rick Perry to recommend he halved the budget figure earmarked for new prisons and spend the rest on treatment instead.

Jerry Madden, using Fabelo's numbers, took on the Texan establishment with gusto and his 'drug courts' are one of his most striking creations. We spent an incredibly moving afternoon in Judge Bradley's STAR drug court in Harris County, Houston observing this new justice in action. Judge Bradley is no shrinking violet either, she's sentenced Texans to the ultimate penalty in the past but is passionate about this new court because it's working.

Everyone of the young people coming before the court has been in prison before and they've re-offended in a way that would previously, and would here for sure, send them straight back to learn how to become better criminals and be sure to be a regular on the revolving door. Drug court is a tough alternative; they live in halfway house style premises but they hold down jobs and they maintain links with their families and importantly, their children – and every two weeks they come back to court for a kind of progress report.

Those who have not behaved face the music and we saw one young lady taken back to county jail – crucially, watched by her peers. But we saw others receive glowing reports of their progress and receive praise from the judge they looked up to in an almost parent-like way. They wanted to please her and they wanted to not let down each other. It was so incredible to sit and watch lives literally being turned around and it was inspiring for every member of our cross-party committee. More importantly, to return to Tony Fabello's key data, it's working. Recidivism rates in Texas are falling fast whereas ours in the UK are rigid, especially for those serving short-term (ie; less than 12-month) sentences.

The trip showed us so much more than I can cover here, including the Nurse Family Partnership in Houston which is an evidence-based, community health program transforming the lives of vulnerable first-time mothers living in poverty and literally preventing tomorrow's criminals from being created. It also saw us all being given freedom of the City of Austin but that's a tale for another day.

Above all, Texas showed me – and I hope to show Prime Minister Cameron and Chancellor Osborne – that there is a credible conservative case for breaking the cycle of crime. It's a fiscally conservative argument because a smaller prison estate is a smaller state and above all, it's morally right. There will always be serious offenders who need locking up and need to stay there and no-one (here nor there) is arguing any different but there are the others and we can't afford the ongoing rate of state failure they represent. As Senator Madden said to us; "If you are keeping people in prison who do not need to be there, then that is a waste of taxpayers' money." I could not have put it better myself.

Pictured; Steve Brine in the Harris County STAR drug court (Houston) with Judge Denise Bradley in the chair and members of the Justice Select Committee.

Further links for people and organisations mentioned in this article ...