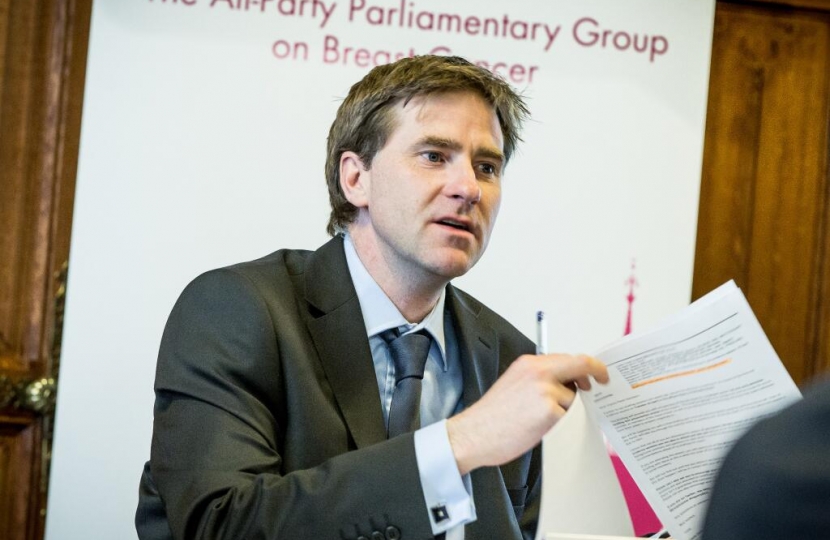 In addition to his duties in the constituency, the House of Commons and in Government, Steve Brine, is one of the most active MPs in Parliament supporting and serving on a number of important All-Party Groups.

All-Party Group for Children & Early Years - Steve was asked to Chair this group which works alongside Steve's work on this sector in the 2019 Parliament.

All-Party Breast Cancer Group - From May 2010 to March 2015 Steve co-chaired the group alongside (now retired) Liberal Democrat MP Annette Brooke and Labour's Sharon Hodgson. The group, which is backed by Breast Cancer NOW and the other main UK charities in the field, meets regularly and holds a number of events throughout the parliamentary year. Due to his role with the Secretary of State for Health, Steve handed over the chairmanship in June 2015 but remains one of its greatest supporters. Read more about this group

All-Party Cycling Group - Keen cyclist Steve is Vice-Chair of the main cycling group in Parliament; one of the most vibrant and well supported groups in Westminster. Read more about this group

All-Party Autism Group - Steve is one of the Vice-Chairs of this key group in Parliament. His interest in autism and special educational needs in particular drive his involvement in the group. Read more about this group

All-Party Group for Parkinson's - Steve was vice-chair of the main Parkinson's group in the 2010-2015 Parliament which is supported by Parkinson's UK. Due to his role at the Dept of Health he cannot be a member in the 2015-2020 Parliament but continues to attend events and support the group. See group website link and the Parkinson's UK pages

All-Party Group for Ovarian Cancer - Steve was a member of the group for five years from 2010-2015 and has spoken in debates and supported events in Parliament since his election to Parliament. See; Silent national scandal and visit Target Ovarian Cancer pages

All-Party Group for Park Homes - Steve helped run the group for many years when he was first in the House of Commons, working as a key part of the campaign which led to the 2013 Mobile Homes Act. Read more about Steve's work here

Other All-Party Groups Steve Brine is (or has been) involved with include; All-Party Group for Financial Education of Young People, for Civic Societies, for Credit Unions, for Dementia, For Direct Democracy, for Maternity, for Muscular Dystrophy, for Retail Crime, for Citizens Advice Bureau's, for All-Party Group for Transplantation, for Drug Policy Reform, Interest Rate Swap Mis-Selling, for Nuisance Calls, APPG for British Hundu's, for Sixth Form Colleges, Speech Therapy, National Parks and even the All-Party Group for Village Halls!